In their fifty-year film career, David and Sally Shaw-Smith have made more than eighty documentaries, primarily focusing on Irish life in the latter half of the twentieth century. These have included series on a history of Dublin, contemporary Irish artists, architecture, angling, and the famous Hands series on traditional Irish crafts and way of life. 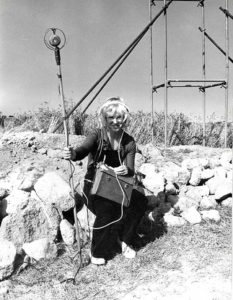 Sally is an artist who has illustrated many educational books on Ireland.  While raising four children, she and David travelled around Ireland, identifying subjects for the Hands films. Sally was the sound engineer and instrumental in the editing stage of the films. She also provided all the illustrations for Traditional Crafts of Ireland, the book that accompanies the Hands series.

David grew up in Dublin. From an early age, he was inspired by traditional practices and the natural world. Shaw-Smith joined the recently formed RTÉ Irish state broadcasting organisation in the early 1960s. He went on to work for the renowned wildlife filmmaker Gerrit Van Gelderen where he honed his skills as a camerman, before becoming an independent filmmaker in the early 1970s.

Sally and David have continued to promote the work of Irish crafts people. Their life’s work is now housed in the RTÉ film archives in Dublin.